We British, apparently, are the porkers of Europe; and not far behind [excuse inadvertent pun] the US in world fatness tables. Horrors! Why are we all so fat? And what is to be done about it? ‘Too much access to fast, fatty, sweet, calorific junk!’ shriek the health gurus. ‘Not enough activity!’ scream MacDonalds, Burger King, Pizza Hut, Kentucky Fried, Cadbury’s et al. Blame the schools! Blame the parents! Blame food manufacturers! Blame the fast food outlets!

Film clips accompanying news about obesity are always shots of portly, overspilling pedestrians on the street, usually their middle portions, showing how their flabby tummies are barely contained by their clothing and their bottoms and thighs wobble as they lumber along, or seated at cafes tucking into clandestine mountains of chips. 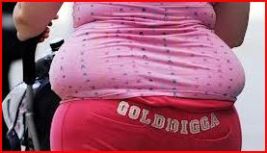 I’ve always wanted to know whether anyone recognises themselves when these clips appear. For instance, take the young woman in picture 1, pushing the pushchair. She is wearing a very distinctive, eye-catching ensemble…a spotty pink tee shirt and hot pink, ‘GOLDIGGA’ trousers-not hard to identify.

The gentleman in picture 2 seems, from his outfit, to be about to take part in a sporting event, although it is difficult to imagine which one. Can he have checked his look in the mirror before leaving home? Indeed, might he have reconsidered his wardrobe choice had he realised he’d be caught on camera? 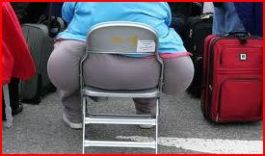 I’ve more sympathy with number 3, given that she is, in all likelihood in transit, hence her choice of clothing [and the surrounding luggage]. She also clearly has no idea of how she looks from the rear view, particularly posed on a small chair [or perhaps a normal sized chair that is dwarfed by her ample derriere]. How can it be comfortable for her to be bulging over the edges in that way? She presents the overall impression of a string of grey, budget sausages.

Number 4 has been captured in the very act of scoffing! What did she say to her loved ones when her image was broadcast to the nation? That it was a case of mistaken identity? That she never eats lunch?

No, I’m sure that unless these unlucky portrait subjects were exhibitionists they would have been unlikely to sanction the use of their corpulent bods to illustrate negative reports on obesity. So it follows that they were the unwitting victims of the papparazi lens, which is a discomforting thought-because today, or tomorrow, or next week it could be you or me. And I don’t know about you, but though I do not consider myself to be obese, I am not the whip-thin little wraith I once was…but then…as I said in a previous post…I never look in mirrors, so I might not recognise myself after all.