The family bathroom in our abode houses a historic and valuable collection. This collection is added to every time we return from a trip and has become extensive enough for me to consider opening to the public on bank holidays and special occasions. It was begun almost thirty years ago when I challenged a friend to bring me the very worst souvenir on her holiday and has been augmented ever since by various friends and family members, as well as ourselves.

The newest item in the collection is our nodding godfather, the Don, from Palermo, Sicily. 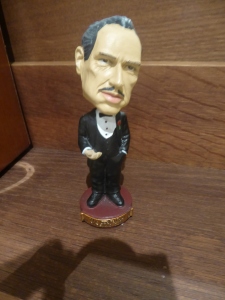 This object, the plastic Madonna from Lanzarote [contributed by Offspring] is arguably the worst exhibit in the compilation, 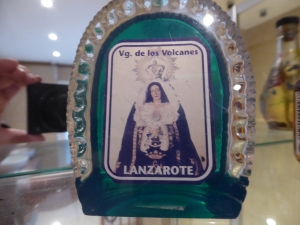 although there are other contenders such as this plastic bird perched on plastic tree stump from India [kindly donated by my sister in law] complete with tiny plastic house and squirrel, a keepsake that used, once upon a time to delight us with a tweeting song but sadly no longer has the capability. 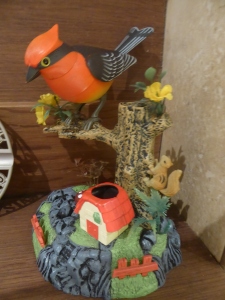 The provenance of some of the objects is their attraction, meaning that their existence is special only to us because we know their origin. Hence the hand-painted glass bottle, labelled with its village name and containing some mysterious home-made fire water that a Croatian gent gave us as a gift for buying produce from his roadside stall is a thing of beauty and a joy forever. 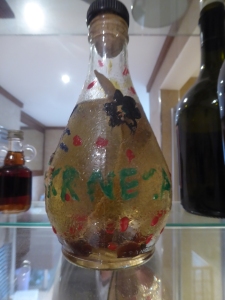 Friend, who was in at the inception of the collecting process still contributes. Knowing that I was always envious of the Taj Mahal in a decorated Perspex box flanked by Christmas trees she recently reciprocated by bringing me her own, snow-globe version. The original [hers] had been designed to illuminate but the electrical system was destroyed, [along with all the lights in the Agra hotel we were staying in] when we attempted to try it out by pushing the wires into the hotel room socket. 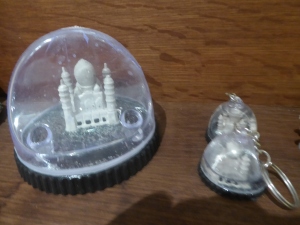 There are many, many more items in the collection; the Grenadian spice box, the tiny tin that once held boiled sweets, given to us by a camp site receptionist in the North Netherlands, so excited was she to have foreign visitors, the Amsterdam canal water [again donated by Offspring, who is an enthusiastic donor], the small guitar on a stand that is a cigarette lighter [bought from a hearing impaired mute person in Tenerife], the dreadful Malaysian ash tray, the beer can holders from Key Largo in Florida, the miniscule bottle of maple syrup, the precious pepper grinder from Woolworths in New Zealand, the ‘evil eye’ from Turkey that has somehow lost its pupil, the minute cow bell and the Alhambra snow globe- countless more besides.

One day, when we have shuffled off to a destination unknown and unexplored never to return I expect that the collection that I fondly call ‘The Naff Shelf’ will all be roundly trashed, since all of these beautiful, hideous things have special meaning only to us, to Husband and myself. Until that time though they are a catalogue of our travels and our lives. Every Picture Tells a Story-but nowhere near as well as The Naff Shelf…

2 thoughts on “The Naff Shelf”