Ah Greece! I used to say if I had only one country  to holiday in I’d choose it. So many beaches on so many islands, such friendly people, such reliable, warm sunshine and blue skies, such history, such dramatic scenery and delicious food!

At the point when I’d said it I’d still only been to Athens and to some islands. I’ve been to a few -Crete, Corfu, the little-known ‘Forni’ islands, Icharea [the Athenians’ favourite], Aegina, Rhodes, Naxos, Samos. The islands are lovely and each has its own special identity but this visit to Greece is for the mainland and in our van, which makes it quite special.

Arriving in dramatic, rugged northern Greece late in the day and after a long, hot drive from Albania we chose a couple of  beach chill-out stops for recovery [and for Husband to get rid of his head cold].

Then we turned south towards the Peloponnese. Husband, who is a sports devotee has harboured a long-term desire to see Olympia, which lies slightly inland on the westernmost ‘finger’ of the Peloponnese. The drive was long and temperatures were in the mid thirties. I wondered if I was hallucinating when I spotted a tortoise on the hard shoulder of the motorway, but there were further sightings in the ensuing days. Oddly there were no flattened versions upon the roads.

The landscape, as we travelled south from Patras became verdant, the hills dotted with cypress trees, vines trailing.

We stayed high up on a hillside overlooking Olympia, waking next day to a view of soft mist and layered mountains.

We strolled around the ancient site in the cool of the morning and followed it by a tour of the excellent museum.

As the tour buses began to arrive we made our exit and headed off south again, this time for a beach stopover at a small village.

The beach was unremarkable but was a good enough place to spend the night. Next morning we were off before we were subjected to any more ‘advice’ from our British, Spanish-living, huge motorhome owning, beach neighbours [not the first of their kind we’ve encountered this trip].

Nafplio is a beautiful seaport town on the Argolic Gulf, colourful houses painted up the hillside and boasting two large castles. We parked on the port side to wander the streets and scale the heights of one of the castles, peering down from the top at the sheer drop to the rocks below. In the town’s pastel terraces a riot of blazing Jacarandas in flaming orange, vermilion and pink cascades from every rooftop. The narrow streets are alive with gift shops, tavernas, guest houses and hotels.

A few miles along the coast we settled into Lefke Beach, a steeply terraced site on a quiet bay. 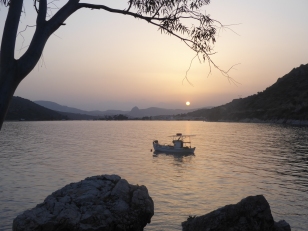 It was time to catch our breath and enjoy the tranquillity of this tiny piece of Heaven, although other than walking along a treacherous coastal road with no pavement or verge there was nothing besides the camp site so after two nights we were ready for more action. On, then to Delphi-