Veteran regular readers of this blog may recall that here in our family residence we collect and curate an esoteric and hideous assembly of keepsakes [more here. ]

Our most recent expedition, which involved 15 countries threatened to be fertile ground for additions to the naff shelves.

A  nervous, hasty flit through Albania yielded nothing, owing to our not having stopped long enough to forage but since Northern Greece and The Peloponnese had been our goal it seemed fitting to acquire a suitably awful object derived from there. How appropriate, then to arrive at Nafplio and discover a wealth of such items! Nafplio is a veritable hotbed of ‘gift’ shops. After some deliberation we settled on this:

-A fir tree, a church and an egg-timer all in one, it is also a fridge magnet! Were I ever to become a habitual user of egg-timers what better place to keep it than on the fridge? Sadly though I am neither a user of egg-timers nor is Husband a devotee of fridge magnets [a small collection of these was unceremoniously dumped many years ago when Husband confessed his abhorrence of them] so this cunning little object resides on the naff shelves, nestling among the other horrors.

I felt that if we were to obtain something dreadful anywhere it could be Bulgaria, judging from the appearance of its towns and shops. Belogradchik’s fortress and stunning rock formations are not universally known and the surrounding few cafes and gift shops are few and a little desultory. The coffee and snack selection was underwhelming. But a tiny shack with artisanal stuff yielded this:

I am at a loss to explain what it is-or what the significance may be, as no explanation was forthcoming-or at least not one that we were able to understand. In the context, however of the naff shelves it is perfectly at home.

The greatest prize was won in the wonderful Market Hall of Budapest, where the first floor houses a plethora of magnificent souvenirs so that we were almost spoilt for choice. Once we’d spotted this particular item [shown below] we were in no doubt that it couldn’t be bettered. There was a range of Russian dolls but Husband, a die-hard Rolling Stones fan took a shine to this portrayal of his idols, looking as little like their namesakes as Lady Gaga to Saint Theresa:

Sir Mick, here on the Russian doll bears a passing resemblance to Jon Hurt. And I can’t help wondering what Keith, Charlie and Ronnie would have to say about their diminished status-Charlie in particular since he has dwindled almost to nothing and manages to surpass only the tiny guitar-doll: 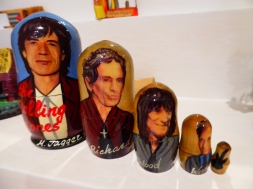 And yesterday I was able to add another new contribution, kindly donated by Offspring, a gem gathered from a visit to Rome:

2 thoughts on “The Ghastly Gathering…”