Last week’s episode described how, like an old Brian Rix farce, Husband beetled over the canal bridge and I, in my ever-present need to take the easier option, scooted around a narrow, lumpy path that wound underneath, resulting in each of us losing sight of the other.
I ploughed on towards Josselin, searching the verges and benches for Husband, or at least his bike. When the turrets of the chateau appeared above the trees I felt sure he’d have stopped at the fence where we’d locked the bikes on our previous visit [from the opposite direction, you understand]. But no-neither Husband nor the bike was there, neither was he installed in the nearby bar, cold beer in hand [an obvious place to look for him].
I gulped some more water-the temperature was continuing to climb at 8.00pm-and turned back. I stopped a few people and asked if they’d seen ‘un homme avec un T-shirt noir et un velo rose’ and was met with negative responses from all. I’d spot the glint of a lone helmet in the distance and think it was Husband but many lone cyclists passed by and still no sign. I cycled back-and back.

After what seemed an interminable peddle back towards Le Roc St Andre, and after seeing no-one as the sun began to dip I caught sight of a cyclist approaching-dark T, black helmet and sweat-soaked-and yes-it was Husband.

We downed what was left of the water, by way of celebration [we are still able to celebrate finding each other after all these years] and peddled slowly back, stopping at a hostelry not far from our site, on a bend in the canal, to throw back a medicinal cold beer or two. 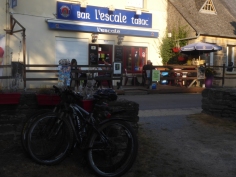 The following morning, following a sticky, uncomfortable night, rather than easing, the temperature at Le Roc soared higher, climbing through the 30s and tipping over into the 40s. Many resorted to the site’s tiny pool, many others [including ourselves] squidged into any bit of shade available, lounging, sprawling, sleeping. It was a disquieting insight into how things may become as summers heat up. Cycling seemed less appealing, but we gamely prepared in the late afternoon and set off in the opposite direction to Josselin, achieving, perhaps, 100 metres or so before Husband’s bike, the improbably named Charge Cooker came to a standstill, the back wheel having seized up.

Reception directed us to a repair shop up the road, which turned out to be splendid at repairing lawn mowers, ‘le patron’, a humourless, moustachioed gent, redirecting us to a cycle shop at St Congard-a small village that was easily included into our itinerary. We returned to the site, me gliding down and over the bridge, Husband half-carrying the recalcitrant Charge Cooker on its one functioning wheel. At this point an ice cream seemed a fair alternative to a cycle in 40 degrees. We spent another uncomfortable hot night and moved on next day to St Congard-first stop the bike shop.

Here, the proprietor, a jovial woman who clearly loved her job dealing with everything bike-related told us that the extreme temperatures had caused the brakes to swell and jam the wheel; that we should pour cold water on it. Simples!

We stayed at St Congard’s small municipal site for 11E and I undertook a short, solitary cycle to Malestroit, all of which was unremarkable except for the pair of beautiful otters I spotted on the return. Tiny St Congard’s one and only bar was firmly closed.

En route to St Martin sur Oust we paused to look at Rochefort en Terre, alleged ‘most beautiful village’, which was indeed beautiful, but also wanted 5E to stay in a car park without water, emptying or anything else. We’d have liked to have purchased items in the shops but came to the conclusion that the stores must be part of the decor, since nobody seemed inclined to serve us. The poor citizens of Rochefort en Terre must be starving, since baguette availability was nil [we were offered a half of a baguette in a restaurant and decided to scarper before we were told the price]. After a quick look we moved on to a less pretentious place, and back to the canal!