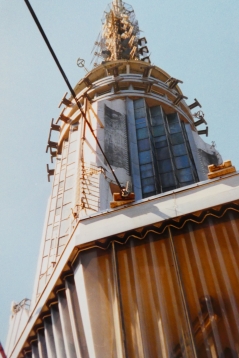 When we are young children our earliest, hazy notions of geography may lead us to associate iconic sights, sites and buildings with countries around the world, perhaps through a child’s atlas or one of those pictorial, world jigsaws. For me, it was kangaroos and Australia, polar bears and the Arctic and The Empire State Building in America; because for so long, throughout my childhood it remained the tallest building in the world.

When we woke on Empire State visiting day I peered out of the window blinds to see bright sunlight, the previous day’s fog and rain entirely dissipated. My suggestion to find breakfast somewhere around Central Park was futile on this Monday, which, it transpired was a state holiday, hence the quiet streets and shuttered diners. The park was busy with runners, cyclists and roller-bladers, their serious intent written clearly in their expressions. Exercise must not be for fun! We trekked back West towards our hotel area to find breakfast and Husband, who was persuaded into sampling pancakes and maple syrup, declared he was not a convert to this American staple. My disgraceful consumption of French toast + maple syrup + butter, however was delicious.

As there were several hours to fill before our ticket time we walked again-to ‘Columbus Circle’, Carnegie Hall and on to Trump Tower, the exterior of which is clad in gold up to the first floor. Inside the atrium an extravagant decor of amber marble and gold. In the basement, where we got coffee, one wall ran with water. ‘You’d think’ I remarked to Husband, ‘ that with all his money Donald would have ensured he didn’t get all this condensation’. Husband agreed. ‘Obviously the roof leaks’ he replied. To a minimalist such as myself the entire building is an excrescence-but each to their own, as they say.

It was a long walk to the Chrysler Building, a beautiful monument to Art Deco dressed in a cone of silver semicircles, the RCA building [radio and TV], the Grand Central Terminal and, at last, The Empire State Building. We could skip the queue for tickets but smugness was short-lived as we joined the elevator queue, though it moved swiftly. We chatted to the jovial Egyptians ahead of us. ‘I am from Luxor!’ announced one, rotund gent earnestly, ‘it is my town!’

‘Beautiful!’ I told him, ‘Beautiful place!’

We reached the lift and piled in for a rapid ascent, quickly up to 80 floors, where there was a viewing chamber, enclosed and still queuing, walking round in a pen. I was worried that this was it, but Husband assured me there must be more. On upwards and suddenly out into an observation area. Stunning! We strolled around-and around, taking shots, looking and looking. In the gift shop I succumbed to Empire State earrings, an item of jewellery subsequently seldom worn that is now lost.

When I peruse the photos of that day, of the crowded observation platform, the excited photographers, gift shop browsers, the views of Manhattan stretching below in all its geometric familiarity, one overwhelming feature cannot be ignored. There is the iconic view, the skyscrapers, the famous landmarks and there among it all, the dark, twin rectangles of The World Trade Centre, jutting up into the blue sky and dominating the skyline because then, for that short time, these were the tallest buildings. And in our innocence of what was to come we marvelled at them.

Washington Square was alive with street entertainers. Three, small black children were playing chamber music, a group of tumblers, glossy and muscular, a scrappy acoustic band of ageing hippies, crowds gathered to watch, to play, to exercise or relax. On to Little Italy, to Sotto and Chinatown and then to the finance houses and courthouses, until Brooklyn Bridge was upon us, dwarfed by the twin towers but no less breath-taking with the sun beginning to set behind it. We had just enough energy to walk across and back, then sank into seats in an Irish bar, the barman happy to converse. 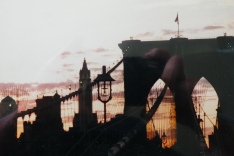 As the skyscrapers became silhouettes we went to the World Trade Centre, eager to ascend the tower at dusk, for a night view of the city. There were few waiting for tickets or the lift, in which the ascent was lightning fast and my ears popped and popped. 107 floors. 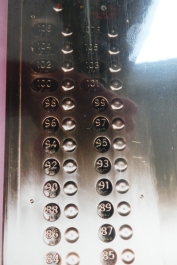 The night view from the top of the World Trade Centre surpassed anything we’d seen thus far, rendering us speechless. In my journal there is a faded, pink post-it note of our plans for that day. On the same page I’ve written this passage:

‘They were somewhat speechless; higher than all the other skyscrapers, up amongst the aeroplanes. The road below illuminated like electrical wires, jewelled with sparkling lights. You could sit against the windows on a metal bench and feel that you were hanging over, a dizzying experience.’

The last page of the chapter bears this John Donne quote:

‘When I am gone dream me some happiness; Nor let thy looks our long-hid love confess; Nor praise, nor dispraise me, bless, or curse Openly love’s force;