It must be safe to say that the first iconic sight anyone thinks of in relation to India would be the Taj Mahal. It is, of course a large mausoleum, built by hundreds of workers over many years by emperor Shah Jahan to house the tomb of his favourite wife, Mumtaz Mahal, a fact that spoils the romance a little in that she was not, exclusively his wife. A terrific novel, Taj, [Taj] tells the story of the building of the monument and Shah Jahan’s relationship with his wife, who died giving birth to their 14th child.

In my memory, Agra as a city was not a stunner. It may well be now, but then, as we entered the conglomeration by coach, it did not immediately reveal impressive buildings or elegant streets. We became entangled in a traffic jam, as usual, which allowed us time to study the mesmerising spaghetti of electric cables that crowned every roof corner. The jam, we learned,  was caused by a demonstration by primary school teachers…

We checked into the Hotel Ammar, modern and featureless, otherwise fine. Next day we would visit the Taj.

Our transport to this jewel in India’s crown was by camel cart, the animal amenable and well-behaved despite its arrogant expression.

We enjoyed some trundling along, sitting in the cart then, never one to pass up an experience I embarrassed Husband by taking up the driver’s offer to sit and ride the camel.

Before long we’d arrived at the Taj Mahal. And there it was, just exactly as it is in every photo, a perfect white wedding cake perched behind a rectangular pool. Except the pool was empty. 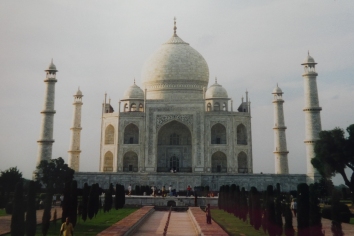 Some work was being undertaken at the monument. The pristine lawns were being mown and some decorative panelling restored. 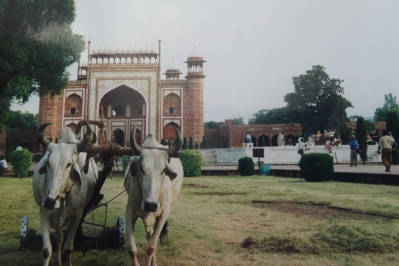 The Taj is not, in fact, perfectly white. Up close it is covered with an intricate tracery of pattern on each and every surface and it is this, rather than the shape of the building which takes the breath away.

The interior holds the two tombs, of Shah Jahan and of his beloved[ish] wife. These, too are encrusted in ornate designs. 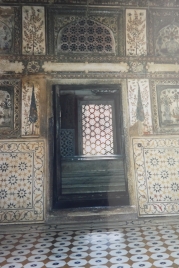 The Taj is built beside the River Amuna, which provides a stunning setting, especially at sunset. 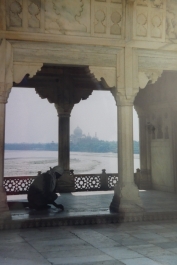 For the duration of this first leg of our India adventure I’d been seeking the ‘Holy Grail’ of naff shelf discoveries and had thought it would be found somewhere in the Golden Triangle. [The Naff Shelf]. At this time I was still swapping keepsake atrocities with a friend. And so it was, following the Taj Mahal visit, amongst the jumble of gift stalls peddling all manner of tat, I found the best horror of a souvenir I have ever seen, before or since. Regrettably I have no photo of it; a replica of the Taj, nestled in a small perspex box decorated with pink swirls, flanked by two miniature Christmas trees. Two wires protruded from the base of the box meant that it could light up!

Flushed with success, we boarded the bus, but my pride in my purchase was lost on a few members of the party whose sense of irony was not so well developed.

Back in our hotel room with Steve and Jane it was decided we should try out the electrics and see the mini-Taj illuminated, so in the absence of a plug Steve suggested we should jam the wires into a socket and ‘see what happened’. The experiment was not without result, as there was a crack and a flash, then the hotel’s electrical system was caput, everything dark and quiet [without air-con] including the model Taj, which we never did get to see lit-up.

In the morning we left Agra to visit a deserted city called Fathepur Sikri, beautiful and a little melancholy, we the only visitors, then on to ‘Akbar’s mausoleum’ which appeared to be run by monkeys.

It was time to return to Delhi. We’d seen a wealth of iconic sights and were ready for a change of terrain, climate and activity. And we’d need to say goodbye to our tour friends, Steve and Jane, who were returning to the UK rather than embarking on the second tour as we were. For we were to meet a new tour guide and fly up to the highest airport in the world-in Ladakh!