The Tanglang-La Pass, reckoned at the time to be the second highest road pass in the world, [although now allegedly the twelfth highest]. Still, this was a high altitude road trip and we were fortunate to have undertaken our trek, which had toughened us up and got us acclimatised. Our conveyance was a bus, driven by an experienced driver of course, into whose hands we’d be committing ourselves. The road, if it can be described as such, was single track and largely unpaved-at times a mere dirt shelf carved from the mountainside. This was manageable, with our brilliant driver in charge, but became hair-raising when vehicles approached from the opposite direction [mostly lorries] and our far-side wheels would overhang the ledge. 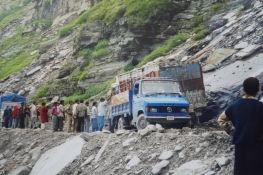 We’d be travelling down from Ladakh, where we’d been hiking, to Delhi, but the final part of our journey back to where we’d begun would be by train.

There were plenty of opportunities to stop and take in views, or to use such facilities as existed-the most notable being what [unless you, reader, know different] must take the accolade for most lofty loo, [and with a view]. 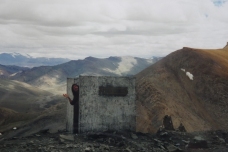 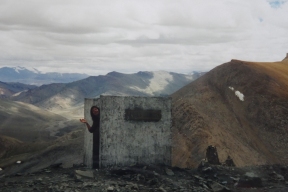 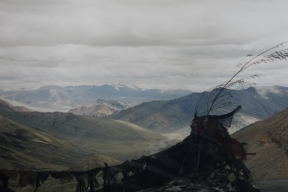 Along the way strings of prayer flags hung in forlorn tatters, meaning someone had taken the trouble to place them-prayers from the roof of the world. Small wonder they were in tatters when you consider the parlous state of the world today.

Sometimes it seemed the road was being constructed ahead of us while we motored, although it must have been repairs that were being undertaken. There was little mechanisation, the workers using woven baskets for rubble and boiling up tar on fires by the roadside then spreading by hand-gruelling work. 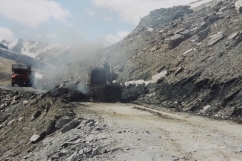 The terrain varied, providing fascinating views, sometimes a group of riders, sometimes a facsimile of a fortress or palace, sculpted from a hillside by fierce winter winds. 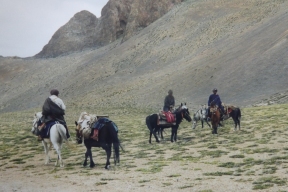 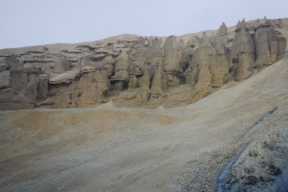 There would also be refreshment stops. Forget motorway services. They would be solitary tents by the roadside containing a small range of canned drinks and snacks and offering cooked dishes such as fried egg sandwiches, produced from a stove with a cylindrical chimney poking our through the top of the tent. High up here where the temperature was punishing and the wind chilly, these tents were warm and cosy. There would sometimes be one or two stalls selling hand-made goods like knitted socks made from course wool. My investment in a pair of these was to prove a godsend in the coming night. 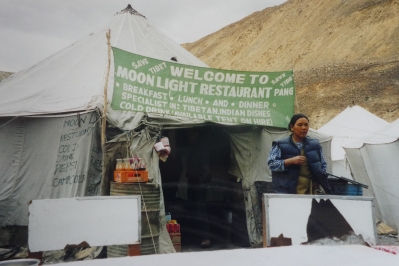 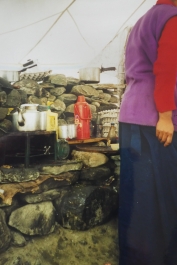 During this long journey there were no hotels. We were not put up in Travelodges or hostels. Overnight stops had to be spent in tented villages. We arrived at ‘Sarchu’ camp, where the standard tents were set up in neat rows and we were allocated one, before joining our group in the open-sided dining area for an evening meal. By now we’d donned warm clothing seeing as we were no longer trekking and the weather was cold-made colder still by a cruel wind and the night approaching.

That night in our tent we rummaged through our bags and unearthed every wearable garment we had, layering up until we resembled Michelin men, then got into our sleeping bags for what must have been the coldest night I can ever remember spending-even with the addition of my newly purchased socks. There was also a point when it became necessary to prize myself from the sleeping bag, out of the tent, into the dark and over to the toilet tent, an undertaking requiring true grit. I was never so glad to see morning arrive and with it a warm coach to continue our descent out of the north.-