There is much to love about Germany; black forests, picture perfect , historic towns, grand rivers bordered by gorges and fairy-tale castles, exciting cities like Hamburg and Berlin, charming, engaging and eager-to-help citizens. But not the motorways-oh no. The motorways are strings of roadwork-riddled tedium, clogged with miles of crawling, wheezing lorries spewing fumes and large, gas-guzzling speed machines reduced to inching along with everyone else.

The drive to Wurzburg was one such journey, with roadworks every 10k and frustrating traffic queues at every junction. And once we’d arrived there was further idiocy from the Tom Tom, which led us around the city in ever decreasing circles with no sign of the camper stop, even though it was flagged on the tiny screen. At that point when we were about to give up I spotted the parking place-beneath the bridge and by the river, a smattering of vans and motorhomes in position. 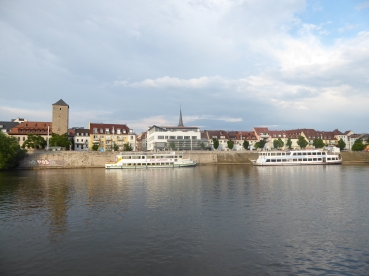 But it was perfect. And at the end of the parking lot was a restaurant serving German favourites, fat sausages, pork cutlets and servings of sauerkraut-an antidote to the annoyances of the day. Across the river the lights of Wurzburg twinkled and now and then a seemingly endless barge chugged past.

Next day we set off across the idiosyncratic footbridge into town.

Wurzburg is home to ‘The Residenz’, [more here], a baroque folly of huge proportions which Husband visited many years ago in a previous life, BM [ie Before Me], and of which he has eulogised on a number of occasions.

Since we are not great breakfasters we strolled the picturesque town a little and settled on coffee and apple strudel at an outside table on a pleasant corner before tackling ‘The Residenz’. Our coffees came though not the strudels. We waited, expecting a slice to appear and after a few minutes two large, rectangular plates arrived laden with warm, sticky slices of strudels, pots of ice cream, pots of cream and a small heap of fruit compote. This is how you know you are in Germany-they are not into skimping where desserts are concerned.

We waddled along to The Residenz and yes-it is an impressively large edifice, matched by a suitably sumptuous interior that reminded me of Hampton Court-boudoirs within bedchambers within salons within chambers, the lot embellished with more golden curlicues than you can shake a stick at. The vast, ornate stoves in the corners of every room took my eye but of course with high ceilings and rooms of such size they’d have been essential.

The gardens were as expected, formal, dotted with statues and fountains and a labour of love.

Next morning we were off again, following the Main River to Ettelbach, a jolly town where pigs seem to be a theme. The heavens opened on to our riverside site but the expedition was drawing towards the end as we headed on to Belgium, Luxembourg and Calais.

Back again at the new camper park adjacent to Calais’ ferry port the evening sun beat down and we took ourselves to the sea front for a last supper while the ferries came in and went, disappearing over the horizon into a pink, candy floss sky. 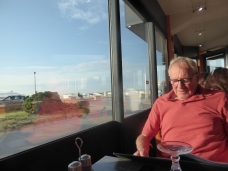 Waiting in the ferry lines and seeing the arrivals pouring down the ramp gave me a pang of regret, for while I was looking forward to going home and familiarising myself with our house I knew I’d miss the thrills and spills of exploring.

So it was ‘au revoir’ Europe. Can’t wait for next time…;)