At breakfast, taken in the beautiful garden of our Leh hotel before we began our trek, I discovered that some members of our group had taken preventative medicine for altitude sickness. I’d wondered why I’d been the sole sufferer of our group to have succumbed to this debilitating condition! But I had rallied and was now feeling up for a trek. We were used to vigorous exercise at home, being habitual daily runners.

This second tour group consisted of several couples [including ourselves], a couple with a teenage son and some singles; a couple of older, single women [one rather type-cast spinster and the other a charming widowed lady who I walked alongside for much of the route], a somewhat unfit looking, younger man who’d brought walking poles, a youngish woman. One half of a Welsh couple, Gareth had the most extreme eating phobia I’d ever witnessed [including the fussiness of my own children as toddlers] and seemed to exist solely on bread and chocolate, a tragedy in a country such as India. Despite this he was the fittest of all of us, with calf muscles like beer bottles and an ability to run up a mountain slope faster than a goat. 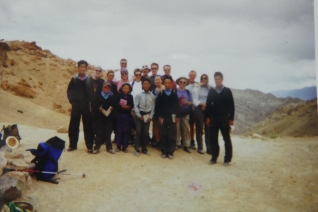 While the mountain scenery was often stark and unmarked with vegetation in the higher levels there were stunning views as well as encounters along the way. On our first day we paused on meeting a group of schoolchildren making their way to school, an arduous hike they must make twice daily. They were cheerful and friendly, wanting to show us their exercise books, shaking our hands, their warmth shining from their smiling expressions.

Further along we caught up with a lady whose sheep had escaped and who’d clearly had to track the animal for miles across the peaks before capture, so some of our group [Husband included] gamely took turns to carry the sheep for her. The creature was extremely smelly, which resulted in a transfer of aroma to Husband, of course.

At the end of each day’s walk the bathing facilities on offer were a small bowl of warm water or a bathe in the snow-melt stream using eco-friendly mountain suds. Most chose the freezing water after a sweaty hike up and down slopes but it needed to be undertaken quickly while the sun was still up because, as is typical in mountain terrain the daytime temperature was hot, the nights cold. Toilet provision en route consisted of ‘behind the nearest large rock’ and in camp there would be a small tent over a hole in the ground, which was filled in on our departure.

Our tiny, 2-man ridge tents would be up and ready by the time we got to camp, also the the dinner table. The pack ponies would be set free of their loads and be enjoying a well-earned graze. Then we’d sit together at the long table and enjoy a meal prepared by our crew. 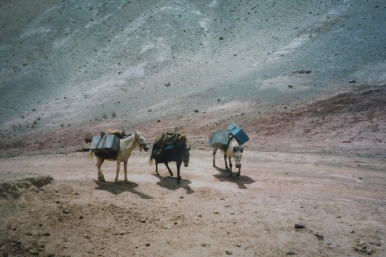